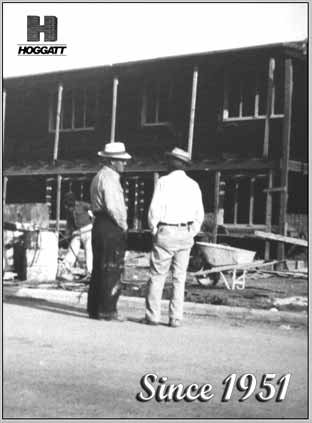 In 1951, Phinehas Hoggatt formed Hoggatt Masonry as a way to provide for his growing family and to utilize the skills as a mason he had formed many years prior. The underlying principle was that with hard work and a belief in God, all things are possible.

In the beginning, times were tough. Not only did Hoggatt Masonry face the arduous task of masonry construction, Phinehas had to battle lack of capital, and the belief of general contractors that masonry was not something they needed to subcontract. The prevailing thought was that masonry construction was something that general contractors could handle in-house. Phinehas Hoggatt believed otherwise. By subcontracting the masonry work on a typical commercial building, the general contractor would receive a higher quality masonry project at the same or lower cost, in addition, he wouldn’t be responsible for any liabilities resulting from problems with the masonry aspect of the construction projec

As the amount of work that Hoggatt Masonry performed rose, additional help was necessary to run the company. John Hoggatt, working for the company as a bricklayer, and Phinehas’s oldest son, was promoted to foreman and began running some of the jobs. Day to day activities of a foreman include supervising the construction of the project, trouble-shooting to prevent problems, handling change orders, ordering of materials, and managing and motivating the employees. James Hoggatt, working for the company as a bricklayer, joined the management team as an estimator and project manager. With the promotion of these two, Phinehas, or Preacher as he was known, was free to pursue larger jobs and deal with a greater amount of general contractors. Included in Hoggatt’s portfolio during this time was numerous churches and schools, as well as the Texas National Guard Armory building, and the City of Houston Recreation Center building.
Paul D. Hoggatt joined the company as a bricklayer while still in high school, and became a foreman in the early 1960’s. Preacher believed in his son’s ability to produce exceptional masonry and to get the most out of the employees of Hoggatt Masonry. This support and
belief led Paul to become one of the most respected foreman in the Houston area, even at a very young age. 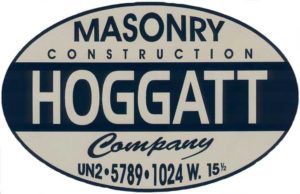 n the early 1970’s Hoggatt Masonry, had grown to the point where changes in structure were necessary in order to thrive in a changing marketplace. Some of these changes include evolving from a sole proprietorship to a corporation. In 1972, Hoggatt Masonry became Hoggatt, Inc. Other changes included moving James Hoggatt into the position of President, Paul D. Hoggatt to Vice President, and John Hoggatt to Secretary/Treasurer. Preacher Hoggatt continued to work in the field operations of the company, and the officers of the company performed estimating, billing, job costing. These changes allowed Hoggatt, Inc. to grow even larger, providing the masonry on such notable projects as Westwood Mall, the City of Houston Fireman’s Training Facility, St. Thomas Episcopal Church sanctuary, and many others.

During the late 1970’s and early 1980’s, changes again swept through the company. Preacher Hoggatt reached a point where the company was in firm, capable hands, and he decided to retire. With his legacy fully entrenched and established, Preacher began to travel abroad to such places as South Africa and Europe. He continued to travel and see new things until, on December 09, 1991, Phinehas “Preacher” Hoggatt passed away.

James Hoggatt decided to leave the company in the early 1980’s to start his own masonry construction company. Currently, he is working as a mason in Fayetteville, Arkansas. Philip Hoggatt, a foreman, left the company also in the early 1980’s and began to carve limestone into beautiful lamps, bookends, benches, and other unique creations. He and his wife currently own and operate Carved Stone Inc. in Dripping Springs, TX . Sam Hoggatt continued to work on and off with the company for several more years into the mid-1990’s as a bricklayer. But the largest change of the 1980’s came as an organizational shift.
In the mid-1980’s the economy took a downturn. Competition for the larger masonry jobs was intense. Profit margins dipped and the quantity of work waned. Paul Hoggatt (now President of Hoggatt, Inc.) looked outside the box for new markets. It was during a jobsite visit in Ft. Bend County that Paul, taking notice of brick fencing at a new residential subdivision under construction, asked if he could be placed on the bidders list for the perimeter fencing and hardscape. Even though Hoggatt, Inc. had never constructed a single-wythe masonry fence, the developer conceded and Hoggatt, Inc. was allowed to bid on the next project. Hoggatt, Inc. was the low bidder and a new challenge arose: learning the single-wythe, or thinwall, fence system.

After a little bit of a learning curve, John and Paul Hoggatt, along with Corky Cude and Mike Bridge, got the hang of the system, and started to look for more fence work. 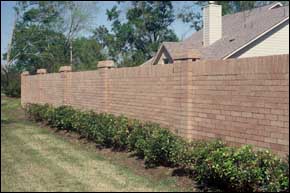 These first few fence projects in the late 1980’s eventually led to a complete organizational shift: from commercial masonry contractor to a specialty contractor with a focused niche on masonry fencing and hardscape. Hoggatt, Inc. began constructing thinwall masonry fencing for such notable communities as Cinco Ranch, First Colony, Southwyck, Silverlakes, and Green Trails.
Throughout the 1990’s, Hoggatt, Inc. continued to focus on the masonry fencing and hardscape market. With John running the field operations, and Paul running the day-to-day operations, it became obvious that if the company was going to continue to grow, additional help would be necessary. In 1997, Cathy Carlson joined the company as Office Manager, and in 1998, Mel Oller joined the company as Vice President, specializing in estimating and project management. Andrew Hoggatt, Paul’s son, soon joined the Company as Marketing Director and has since helped in all areas from truck driver to project manager. Mel Oller and Andrew Hoggatt soon became owners in the Company. Erika Lafuente joined Hoggatt LP in 2013 and Ron Oller came aboard in 2015.  Erika now runs the office and Ron is a senior estimator/project manager.  Along with their arrival, Hoggatt LP moved its corporate offices to its current location in Pasadena, Texas.

With Hoggatt’s exceptional combination of highly experienced leadership and youthful exhuberance, and it’s great relationships with Developers and Architects, Hoggatt will continue to provide consistant quality and service to it’s customers far into the future.